One of the most popular maxims in the existing anti-consumerism world is "Buy Nothing." From AdBusters' annual call for "Buy Nothing Day" to various other groups that focus around the phrase to discussions about consumerism that toss it off as a verity, "Buy Nothing" has come to occupy a prominent place in the evanescent image of anti-consumerism.

Which is a pity, because it's self-cancelling nonsense.

Serious anti-consumerism is, in this time and place, an extreme stance. It is contrary to many of the basic assumptions that underlie our lives, culture and economics. To stand up in favor of anti-consumerism, to oppose the cycle of consumption, is an inherently extreme act. However, there's a difference between pointless extremism and what might be called rational extremism. There is far too much of the former in the world, and it grabs headlines and news feeds every day. The message it conveys often strongly colors the audience's view--and the color is that of negation.

It is common, for some reason, for proponents of contrary opinions to couch them in the most extreme terms--sometimes beyond extreme into the outlandish. Movement after movement and effort after effort does not reach for the reasonable, the workable or the possible, but for absurdly inflated goals: ban all cars. Dump fossil fuels. Open all national borders. Eliminate money. Eradicate cancer. Give North America back to the native population. 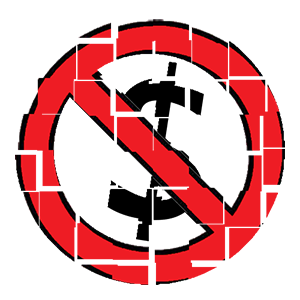 It may feel good, or feel powerful, or even feel purposeful to reach for the moon in a social or civic endeavor, but setting a goal that cannot be reached is self-cancelling. It dooms the movement to a life span of essentially meaningless effort, often wasting the time, money and good will of a great many people whose contributions could otherwise achieve real and meaningful change. To stubbornly hold out for only the furthest, vastest and most difficult (or impossible) goal is to misunderstand how problems are solved, and to block a myriad of interim, iterative, constructive possibilities. Such positions are calls for an unwinnable all, or nothing--and nothing is what they will achieve.

To stand on the position "buy nothing"  is to fall into this nihilistic abyss, to be extreme for its own sake (and the sake of a few mocking headlines and other drive-by journalism). It pushes the audience's buttons, many of them the wrong ones, to no particular end. It neither educates nor entertains; it is eminently pigeonhole-sized and forgettable. Even those who are aware of their consumption excesses are not going to take away anything useful from the phrase. It is worse than a waste of time, accomplishing nothing; it is an active dilution of the more sensible goals of anti-consumerism efforts. Its senseless and sense-free noise block avenues of understanding that might actually further consumer rejection of fostered consumption.

After all, no one "buys nothing." Aside from a vanishingly small number of people who live a wholly self-sufficient life in the woods, we all buy the things that make our lives possible (and comfortable, and entertaining). Few of us have any choice but to buy food, clothing, medicine, and even entertainment. Most of us have, or choose to buy pretty much everything in our lives. There is nothing wrong with that--we are consumers by need and nature. We are buyer-sellers because, fantasy and idealization aside, a world of the self-sufficient achieves nothing except individual survival. We have a circle of mutual production-consumption because we are organized, and socialized and civilized to greater ends and purpose than staying alive and fed one more day at a time. (That this circle--cycle--is diseased and predatory is the problem, not the cycle itself.)

So screw "Buy Nothing"--concept, phrase and promoters. I call on organizations, groups and promoters of the anti-consumerism front to dump the phrase. AdBusters: repudiate your silly, in-joke, art-contest attachment to Buy Nothing Day in favor of a message the audience might actually hear. Everyone else: stop using this meaningless phrase as an anchor for your efforts. Find your own words that convey what you really mean; like all hobbyhorses, that wooden phrase is getting you nowhere. If you can't find pithy, effective words of your own, start with the renegade maxim "Don't Buy It"--a far more nuanced and specific call and concept. Make everything "Don't Buy It" stands for a meaningful concept for your audience.

After all, we're all fighting for pretty much the same thing. Let's fight together, and make our admittedly extreme position sound rational instead of pointless. We gain nothing by fighting for "nothing."

1 thought on “The Nihilism of “Buy Nothing””

If you find the material here of interest, you may want to visit the new, parallel effort at Analytical Consumer Economics, which takes a more formal approach to many of these issues.