Extracted from the forthcoming book
Renegade Consumer: The Battle for Your Economic Freedom.

A very useful tool for gauging the worth of spending is a calculated index I’ve tagged the DBI Factor—with DBI standing for “Don’t Buy It.” This factor turns a purchase into a scaled bite of your lifetime wealth. It’s one of the renegade’s most powerful tools.

In the later years of most people’s lives, direct earning power is reduced and a considerable amount of available wealth comes from lifetime investments. Unless you’ve done the math on long-term investments so many times as to have lost the surprise, it can be astounding what even modest savings can turn into if left alone and allowed to grow. With that in mind, the real cost of an item is not the amount paid for it, but how much that amount represents in the long term. If a hundred dollars is spent on a gadget, that money is gone forever from your lifetime wealth. Since the gadget is likely to be gone in a very short time—broken, outdated or just discarded—it’s useful to gauge how much the money would be worth in place of yet another piece of crap.

Historically and over the long term, personal savings rates have averaged around five percent. It is not unreasonable, over a span of several decades, to expect an investment return of five percent or more, compounded daily—and that is probably on the low side when measured over two to four decades. There will be times of lower rates, but also be higher eras—financial moments in which it will be good to have a pile of cash to lock in for long terms. For the purposes of this discussion, let’s take the safe road and assume a lifetime average return of just that five percent.

With that rate assumed, the amount of time for investment becomes the critical component of the DBI factor. A hundred dollars spent at age twenty has greater potential than the same amount spent at fifty. Rather than create some overwhelming set of tables for different ages, let’s look at it in light of the term between the purchase and the date you’ve set for your retirement or Free Day (the date of your final economic self-sufficiency).

If you’re 25 and planning your Free Day for 65, you have a span of forty years for that purchase money to grow. For investments of forty years at a five percent return, compounded daily, the principal will increase by DBI40, a factor of 7.39. So if you walk away from the shiny gadget and bank that spare cash instead of spending it, have you saved a hundred bucks? No, you’ve saved $740. Look at that gadget again: is it worth a seven hundred dollar bite of your finite lifetime earnings? Probably not.

Sometimes, yes—of course. Sometimes something is worth the $100 plus compounded costs—and if you can justify that real cost, then buy away and enjoy. Being a renegade does not mean being a miser, a minimalist or excessively frugal; it means making the most informed possible decisions on purchases—such as this example.

It’s my guess that if you hold the DBI factor in mind when you’re eyeing a fancy acquisition with less usefulness and a shorter lifespan than you might think, you’re going to decide, increasingly often, that it isn’t worth the compounded cost. It’s simply not likely that you’ll consider, say, a jet ski is worth $22,000 ($3,000 at DBI40). Or that a motor home you drive on two or three long trips is worth $210,000 ($60,000 net cost, after resale, at DBI25).

This evaluation holds true for all purchases, large and small. A hundred ten-dollar purchases in your twenty-fifth year add up to $7,400 at DBI40. How many of those can you forgo, knowing the real cost? Is a cool little pocket flashlight really worth $75? Is a $5 cup of fancy coffee worth almost $40… especially when you buy several a week, or three hundred a year? Maybe they are… as long as you’re considering their real cost and judging it against their real value. 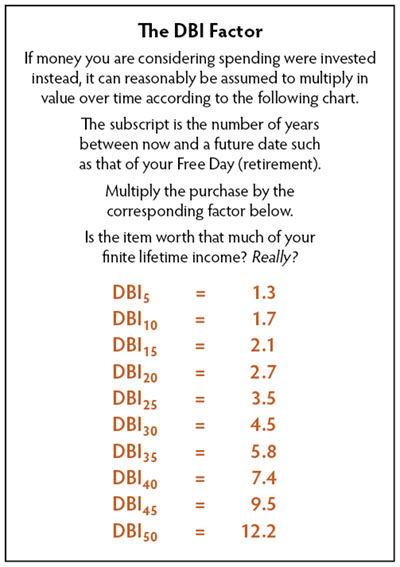 Consider the chart at right:

Remember, too, that these calculations are simplistic. As we just discussed, many large purchases are often “horses”—with a horse, it’s not the initial cost, but the upkeep. Vehicles and other major property are subject to endless expenses—and each of those expenses has its own compounded cost. A motorhome, boat or similarly expensive and maintenance- and operation-costly vehicle could cost hundreds of thousands of long-term dollars. Unless they’re going to be used frequently and well, they’re not likely to be worth their long-term cost. Given the propensity of people to have recreational eyes bigger than their actual plate of time and interest, a motorhome could end up costing $50,000 per trip; a jet ski, more than $1,000 per weekend. (We’ll get back to this in a moment.)

The DBI Factor can be applied to every dollar you spend, but it is most useful regarding discretionary purchases. To apply it to necessities like housing and food costs, you have to figure the difference between an arbitrary minimum cost and any higher level you are thinking of spending, applying the factor to the difference. That may or may not be productive for everyone but if you already have the savvy habit of watching a personal or household budget, it’s easy to check the DBI Factor on any variable—or potentially variable—costs.

A tool is only useful if it is used. By keeping the DBI Factor at hand—and it’s only one number, once you’ve made your choices about retirement or Free Day—you can give your willpower and renegade sensibility a boost every time you consider a purchase. That’s why you’ll find one page of the Renegade Card devoted to the DBI.

Don’t leave home without it.